Microsatellites are highly polymorphic regions of the genome consisting of a short sequence of bases (two to six) repeated many times (five to 50). The term was coined in the late 1980s. Sometimes called short tandem repeats (STRs) or simple sequence repeats (SSRs), they are highly abundant in noncoding regions of DNA, and their functional significance has long puzzled biologists. Due to their repetitive structure, they are prone to strand misalignment causing frequent change-in-length mutations, and their presence provides a target for studies of mutation rates and loads.1

Why are microsatellite instability (MSI) and mismatch repair (MMR) relevant to oncology?

Cancer is a disease, or a collection of diseases, based on losing control of cellular reproduction, and that almost always includes faulty DNA repair mechanisms. DNA repair mechanisms called mismatch repair (MMR) proteins work to restore correct sequences whenever a replication error introduces a mutation, including mutations in microsatellites. Mutations in microsatellites are particularly easy to track and can be dramatic, including insertions and deletions (indels) of entire repeat segments. Damage to these regions is called microsatellite instability (MSI) and is known to be associated with a wide variety of cancers. 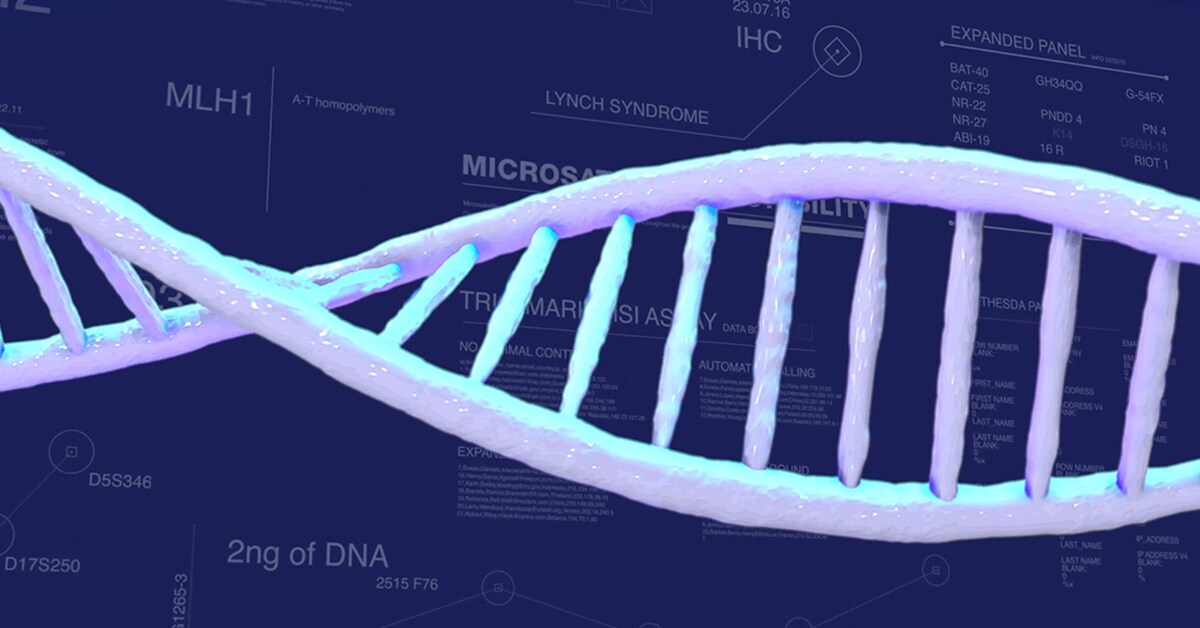 Tumor samples may be assessed for MSI and given an “MSI status,” meaning they have either high levels of MSI (MSI-H), low levels of MSI (MSI-L), or are microsatellite stable (MSS). These categories are based on whether they exhibit mutations in 30% or more, less than 30%, or zero microsatellites, respectively.2 Deficient MMR (dMMR) that leads to MSI has been well described in several human cancers, most frequently in colorectal, endometrial and gastric adenocarcinomas.3 Additionally, growing evidence shows a role for MSI in multiple other cancer types, suggesting that broader MSI analysis may yield important results.

Loss of MMR capacity, like other defects in cell-cycle regulation, is associated with increased cancer risk. For example, MSI is associated with Lynch syndrome, or hereditary nonpolyposis colorectal cancer, an inherited form of colorectal cancer.4 More and more evidence suggests that Lynch syndrome also comes with increased risk of other cancer types,4 making it more and more important to recognize early. MSI-H cancers are also known to be more sensitive to immune checkpoint inhibitor therapies. A critical part of personalized medicine is being able to recognize which therapies best suit a particular case and recognizing that MSI may be part of that process. Learn more about the implications of MSI as it relates to Lynch syndrome and immunotherapy in our other blog post.

How can you analyze dMMR and MSI?

There are several longstanding methods for analyzing MSI and dMMR. Perhaps the oldest is using immunohistochemistry (IHC) to detect the presence or absence of MMR gene products using labeled antibodies. Each protein is detected using a separate tissue sample, and a missing protein suggests a mutation in that MMR gene. This method is limited by its sizable time and cost requirements, particularly in the case of multiple MMR gene defects. It is also only semi-quantitative, introducing errors via subjective interpretation of results. For these reasons, molecular MSI analysis using PCR-based amplicons and fragment-length analysis is becoming increasingly adopted.

Traditional PCR-based MSI detection is done by profiling a set of five established mono- or dinucleotide microsatellite loci, known as the Bethesda panel.6 Unfortunately, it has become increasingly clear that the Bethesda panel, originally designed to study colorectal cancer samples, may not provide the most usable data for other tissue types. Additionally, other limitations were identified due to the dinucleotide repeat markers used, which are less sensitive and specific than the mononucleotide markers. To overcome the latter issue, a new research panel was created and commercialized using five mononucleotide markers, but the problems related to studying MSI in non-colorectal cancer sample types remained.

To improve upon PCR-based MSI analysis further, Applied Biosystems created the TrueMark MSI Assay, which has an expanded 13-microsatellite marker research panel, increasing the diversity of sequences that can be used to determine MSI status in a range of cancer research samples. Along with the TrueMark MSI Analysis Software, which offers automated calling of markers and research samples and does not require the use of a normal control,* scientists can get more efficient and comprehensive MSI analysis across multiple cancer research sample types. It is now easier to study immunotherapy and MSI associated with Lynch-related cancers beyond just colorectal cancer.

Learn more about how we designed the TrueMark MSI Assay for MSI analysis and how it compares to dMMR analysis by IHC by downloading our application note.

*A tumor-normal match is recommended for endometrial research samples, which are notoriously difficult to analyze for MSI.7

For research use only. Not for use in diagnostic procedures.