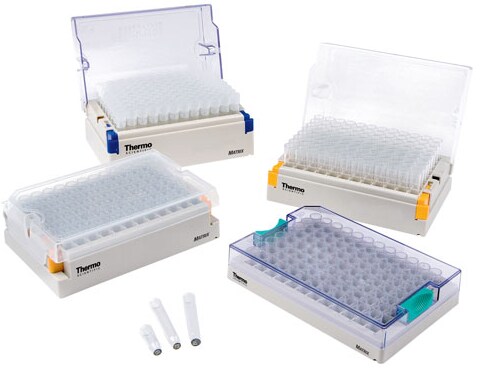 As outlined in the previous post titled The Anatomy Of A Storage Tube, there are several factors to consider when selecting a container to store biosamples. To quickly review, high quality storage tubes are:

Since several brands meet the basic criteria above – or claim to, at least – how can you be certain you’re selecting the storage tubes that are best for your sensitive and irreplaceable biospecimens?

There’s only one way to be sure: Ask the difficult questions and look for data to back up the answers.

Our applications team recently conducted an intensive validation of our Thermo Scientific™ Matrix™ 2D-barcoded storage tubes against two competing products.” The validation experiments were replicated and controlled for variables like capping force . . . and to me, the results were quite convincing.

Among the key findings:

In addition, to simulate performance in laboratory accidents, the team froze 96-tube racks and dropped them from 91.4cm. None of the Matrix tubes showed signs of breaking, while about 2% of the competitor’s tubes failed after being dropped. Of course, nobody plans to drop racks of invaluable samples, but it’s good to be prepared . . . because accidents do happen!

For more detail about Matrix 2D-barcoded Storage Tubes and the test data referenced above, see the application note here.