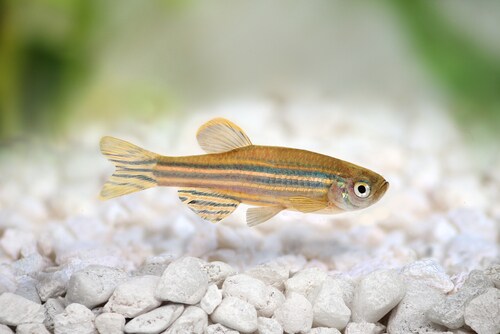 Kessels et al. (2014) recently showed that, proteomically, zebrafish skeletal development is comparable with other vertebrates, thus confirming it as an ideal model organism for studying chondral and intramembranous ossification.1

The researchers used a label-free mass spectrometry-based proteomics approach to characterize and quantify the extracellular matrix (ECM) proteins of zebrafish from the larval stage into adulthood. ECM proteins, including collagens and proteoglycans, play an important role in the appropriate development of bone and skeletal tissue, ensuring strength and functionality. As an experimental model of choice for skeletal development, zebrafish are well studied, showing molecular and biological similarities to humans. Less is known, however, about the protein changes associated with mesenchymal differentiation into bone-forming osteoblasts.

The scientists bred zebrafish according to standard conditions, harvesting fertilized eggs and then studying the embryos at days 14 (larvae), 28 (juveniles) and 358 (adults) post-fertilization. After euthanizing the fish, researchers dissected three distinct body regions—craniofacial, axial and caudal fin (at days 28 and 358 only, since sufficient tissue was not available from larvae). They isolated the skeletal elements from 500 larval zebrafish, 100 juveniles and 15 adults, then used a sequential protein extraction procedure, modified to prevent excessive protein loss. After trypsin digestion, the researchers analyzed the peptides by liquid chromatography–tandem mass spectrometry (LC-MS/MS) on an LTQ Orbitrap XL hybrid ion trap-Orbitrap mass spectrometer (Thermo Scientific). They searched the MS/MS data against the UniProt zebrafish database, using a label-free approach to quantify protein abundance.

The data identified 262 ECM proteins from the three developmental stages and body regions studied. These included structural proteins such as collagen, in addition to those involved in the regulation of skeletal development, such as insulin-like growth factor binding protein 5 (IGFBP-5).

In their presentation and discussion of proteins identified, the researchers show that their data demonstrate the role of the ECM proteome in the skeletal development of zebrafish. Kessels et al. comment on the similarity between the zebrafish ECM proteome and that of other vertebrates, suggesting that their data will be valuable in future skeletal development studies.