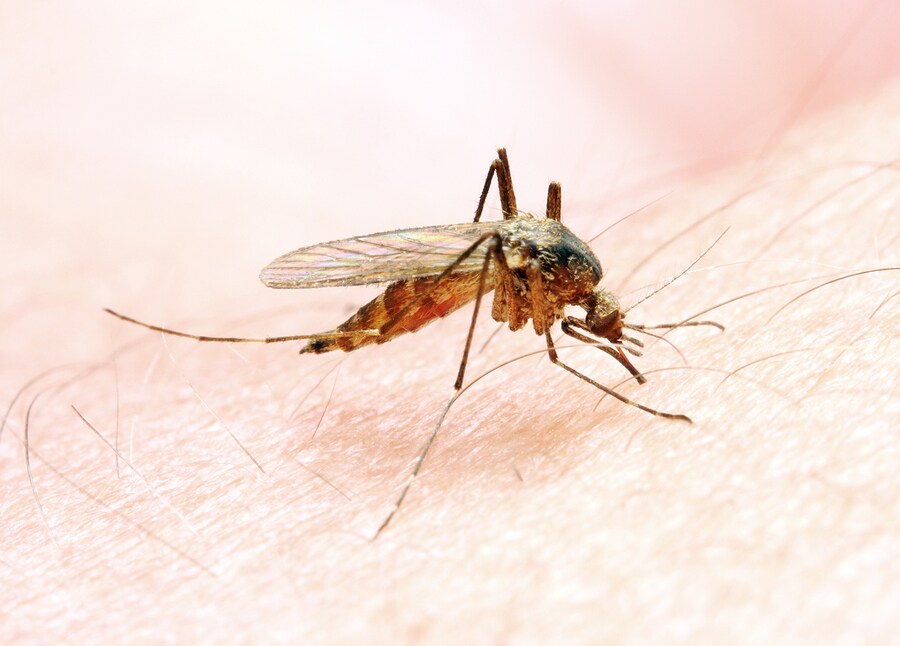 The parasite Plasmodium falciparum is responsible for causing severe malaria endemic to sub-Saharan Africa and other areas. When a person is bitten by an infected female Anopheles mosquito, malaria sporozoites in the mosquito salivary gland are injected into the bloodstream. The sporozoites are passed to the liver and undergo an initial replication known as exo-erythrocytic schizogony. Plasmodium merozoites then travel through the bloodstream, where they invade red blood cells (RBCs). The parasites grow and mature into trophozoites and, finally, into schizonts containing mature merozoites. Eventually, the schizonts will burst, releasing more merozoites, which infect new RBCs.1

Zhang et al. (2013) report that malaria pathogenesis involves, among other things, interactions between multiple surface proteins and ligands.2 In particular, this Chinese research team was interested in host glycosaminoglycans (GAGs), which act as receptors during erythrocyte invasion and intravascular sequestration. Two GAGs in particular, heparin and heparan sulfate, are known to block merozoites from invading RBCs. Because the mechanisms of this process are poorly understood, Zhang et al. used a proteomics strategy to study heparin-binding merozoite proteins.

The research team grew malaria parasites in the lab with human O+ erythrocytes. They collected and purified the resulting schizonts before suspending them in a cocktail of protease inhibitors, freeze-thawing the samples several times and centrifuging. The team then tested the specificity of heparin-binding with the parasite proteins. To do this, they divided 10 fractions of the supernatant and mixed them with either heparin 5000 (Sigma-Aldrich) or chondroitin sulfate A (Sigma-Aldrich), at a ﬁnal concentration ranging from 2 to 0.1 mg/mL. They incubated the samples with heparin-Sepharose and washed the beads three times in large volumes of PBST buﬀer (PBS plus 0.05% Tween 20).

The scientists dissolved bound proteins on a 10% SDS-PAGE and Western blot using a pool of human anti-P. falciparum sera. The researchers then mixed and incubated the parasite lysate supernatant with aliquots of heparin-Sepharose. After washing in buffer, they eluted bound proteins using stepwise concentrations of 1.0, 1.5 and 2.0 M NaCl.

The team searched the MS/MS spectra against a combined database of all possible predicted tryptic peptides derived from P. falciparum, both human and bovine. Ninety-nine percent of the proteins identified were specific to P. falciparum. They identified 6,062 peptides from 811 P. falciparum-derived proteins.

Zhang et al. categorized the proteins into 14 functional groups ranging from pathogenesis and protein catabolic process to signal transduction. The researchers discovered that members of the PfRhopH complex—RhopH2, RhopH3 and RhopH1 (also called CLAG3.2/CLAG3.1)—and the Rhoptry neck protein 3 (RON3) were among the proteins with high aﬃnity to heparin.

Additionally, the researchers found that most proteins expressed as protein domains and not the whole molecules, since some were insoluble. In total, 14 protein fractions from 16 molecules were successfully expressed and tested for heparin binding. Of the proteins tested, nine showed speciﬁc binding to heparin beads. Interestingly, the researchers found that binding can be competed out by heparin in a concentration-dependent manner.

The research presented by Zhang et al. shows that heparin can interact with multiple merozoite-derived ligands and, consequently, it has a profound inhibitory eﬀect on red blood cell invasion as compared to other GAGs. They also suggest that these data support further explorations of heparin derivatives as antimalarial drugs.

Post Author: Emily Humphreys. Emily has previous research experience in eye development, infectious diseases, and aging. While she enjoyed the thrill of research, She has since traded bench work for science journalism. Emily has been a regular contributor to Accelerating Science since 2012.