Cancer stem cells (CSCs) are hypothesized to provide a repository of cells that are refractory to chemotherapeutic agents developed for treating differentiated tumor cells. (Ref.1) A glioblastoma cancer stem cell line (NSC11) differentiates from a pluripotent state to a progenitor cell-like state when stimulated with WP1193, an inhibitor of STAT3 phosphorylation. (Ref.2) In this study, a new quantitative phosphoproteomics workflow was applied to determine pathways involved in NSC11 differentiation. Knowledge of the signaling process is expected to provide new targets for therapeutic intervention.

Recently, a novel autocrine loop (IL-6/STAT3/HIF1α) was discovered in pancreatic cancer cells (Ref.3) (Figure 1). The objective of this study is to probe how perturbations of this loop induce changes in other pathways in CSCs. IL-6 induces the JAK pathway via the IL-6 receptor and STAT3 is a downstream target. (Ref.4) Activated STAT3 increases HIF1α (induced by hypoxia) by blocking degradation or enhancing gene transcription. (Ref.5) A comparison of multiple data sets revealed insights as to each factor’s contribution to CSC differentiation and how they relate to regulation of other signaling pathways.

The treatments were designed to determine the response of NSC11 cells to IL-6, STAT3 inhibition and hypoxia in various combinations (Table 1).

The effects of these treatment conditions on the relative expression of many proteins were investigated simultaneously using the strategy outlined in Figure 2.

Five Thermo Scientific products were essential tools for this method:

In addition to studying changes in protein expression levels, differential phosphorylation at specific sites of the same protein occurred as a result of the various treatments. The high sensitivity of the assay enables detection and quantification of phosphorylated peptides from key, low-abundance proteins such as transcription factors (Figures 4A and B). Because large numbers of changes in peptide phosphorylation patterns were measured in the assay, it will be possible to assign, by computational methods, kinases that are activated in the intracellular pathways, even if the kinases are not directly measured.

Approximately 15% of the quantified phosphoproteins were linked to the IL-6 pathway (Figure 5). Approximately 70% of the remaining proteins could be assigned to other interlinked networks that were regulated by the experimental treatments, and differential effects of the treatments were observed in those networks and canonical signaling pathways. Of the remaining unassigned data, novel assignments reside, but those need to be further examined with the help of computational experts.

Figure 5. Quantified IL-6/STAT3/HIF1α signaling partners. Panel A (above): The complex network of identified interacting proteins was superimposed on the original IL-6/STAT3/HIF1α pathway loop (white symbols). The pink and red coloration indicates proteins identified by mass spectrometry; depth of shading is related to magnitude of the quantified change in expression. Purple symbols represent proteins that were not directly identified but were inferred based on the other proteins/peptides identified. Panel B (below): Relative differences in the identified phosphoproteins are expressed as ratios normalized to the normoxia/IL-6 control condition. Positive normalized ratios indicate up-regulation, and negative ratios indicate those proteins down-regulated relative to the normoxia/IL-6 condition.
Conclusions

Quantification of pathway changes in NSC11 cancer stem cells in response to the six different experimental conditions showed expected pathway changes in the IL6/STAT3/HIF1α loop but also provided peptide phosphorylation patterns and novel knowledge of other pathways changed in response to the treatments. The assignment of “unmatched” protein responses currently not defined in the literature by high-level statistical analysis will provide further insights into the behavior of the NSC11 cells during differentiation to progenitor-like cells.

NSC11 cells were cultured in serum-free DMEM/F12 medium supplemented with B27, EGF and BFGF. Six 24-hour treatments of approx. 2 x 107 cells (each) were studied, including vehicle control, treatment with IL-6 (10ng/mL) or WP1193 (5µM) and WP1193 plus IL-6 stimulation, and cell culture conditions with normoxia or hypoxia. Cells were harvested and lysed in modified RIPA buffer (50mM Tris•HCl, pH 7.4; 1% NP-40, 0.25% sodium deoxycholate; 150mM NaCl; 1mM EDTA) in the presence of Thermo Scientific Halt Protease Inhibitors and Halt Phosphatase Inhibitors (Part No.). After cell lysis, phosphoproteins were enriched using the Thermo Scientific Pierce Phosphoprotein Enrichment Kit (Part No. 90003), and reduced, alkylated and enzymatically digested. Peptides were labeled with Thermo Scientific Isobaric Tandem Mass Tag (TMT6) Reagents at amino termini and lysine residues. These six labeled peptide samples were combined into one sample, and phosphopeptides were enriched by hydrophilic interaction (HILIC) chromatography and TiO2-enrichment before analysis with the Thermo Scientific LTQ-Orbitrap Mass Spectrometer. Protein identification was performed with Thermo Scientific Proteome Discoverer Software and the IPI protein database, and relative peptide quantification was performed simultaneously by comparing the abundance ratios of the reporter ions from the TMT Tags. Analysis of protein networks was performed using the Ingenuity Pathways Analysis (Ingenuity* Systems, www.ingenuity.com).

For a more complete report of this research, see the following publication: 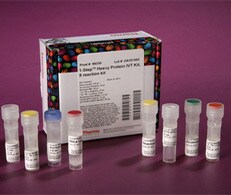