See Navigation
‹ TechNotes
Ambion's Protein and RNA Isolation System, PARIS™, uses a rapid and simple procedure to isolate both total RNA and native protein from the same experimental sample. Cultured cells and tissues that are either fresh, frozen, or treated with RNA stabilization reagents such as RNAlater® and RNAlater®-ICE, are all compatible with the procedure. This kit provides a unique tool for researchers who need both RNA and protein for various downstream analysis, reducing time, cost, and variability between independent experimental samples. The PARIS Kit also permits separation of nuclear and cytoplasmic fractions from fresh cultured cells prior to RNA and/or protein isolation. Here, we tested the procedure with various mammalian cell types and show that both RNA and native protein are efficiently recovered from nuclear and cytoplasmic fractions with virtually no cross contamination between the two cellular compartments.

To obtain total cellular protein and RNA using the PARIS Kit, whole cells are first homogenized in ice-cold Cell Disruption Buffer to prepare a total cell lysate. Since the homogenization is performed quickly on ice and in the presence of detergent, both protein and high quality RNA can be isolated from this lysate. For RNA isolation, a part of the total cell lysate is immediately mixed with an equal volume of Lysis/Binding Solution. This solution contains a high concentration of guanidinium thiocyanate, a strong chaotropic denaturant that rapidly inactivates cellular ribonucleases. Total RNA is then purified from the mixture using a RNA binding glass fiber filter. After three rapid washing steps, high quality, concentrated RNA is eluted.

The PARIS Kit also contains a solution optimized for rapid nuclear/cytoplasmic fractionation of fresh cultured cells. The fractionation method is based on differential lysis of plasma and nuclear membranes by nonionic detergents. After selective lysis of the plasma membrane in Cell Fractionation Buffer, intact nuclei are collected by a quick centrifugation step and resuspended in Cell Disruption Buffer. The supernatant contains all of the cytoplasmic components. Following the same procedure described above, both protein and high quality RNA can then be isolated from each cellular fraction. The entire procedure for the simultaneous isolation of RNA and native protein from total or nuclear and cytoplasmic fractions can be completed in as little as 30 minutes.

To examine the efficiency of the PARIS procedure, nuclear and cytoplasmic protein and RNA were isolated from 1x106 HEK 293 cells in triplicate and compared to total protein and RNA isolated from the same number of cells (Figure 1). Analysis of ~5% of the RNA on a 1.2% denaturing agarose gel showed a reproducible pattern of ribosomal RNA bands. While most of the mature 18S and 28S rRNAs were present in the total and cytoplasmic fraction, the precursor rRNAs (the two faint bands above the 28S rRNA band) were detected only in the total and nuclear fractions. Similar results were obtained for RNAs isolated from NIH-3T3, HeLa, and COS-7 cells (Figure 1). 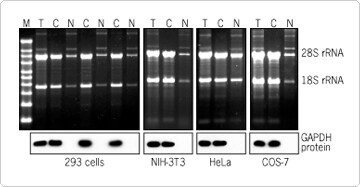 
Efficient cellular fractionation at the protein level was confirmed by Western blot analysis with an antibody specific for the cytoplasmic GAPDH protein (Figure 1, bottom panels). Equivalent amounts of GAPDH protein were present in the total and cytoplasmic fractions with no detectable cross contamination in the nuclear fraction for the four cell types tested.

To further assess the usefulness of the PARIS Kit, we looked at the distribution of pre-mRNA and mRNA in total, cytoplasmic, and nuclear RNAs from HEK 293 cells. RNAs were treated with Ambion's TURBO DNA-free™ to remove trace contamination of genomic DNA and analyzed by end-point RT-PCR with the RETROscript® Kit (Ambion) and pairs of primers specific for the fibronectin gene (Figure 2). Because the PCR was performed under non-quantitative conditions (35 cycles), both forms of the alternatively spliced fibronectin exon EIIIb mRNA were detected in total, cytoplasmic, and nuclear fractions at similar levels. In contrast, no unspliced fibronectin pre-mRNA was present in the cytoplasmic fraction showing efficient cellular fractionation. This result confirms that the PARIS fractionation procedure is ideal for various applications, from studying protein or RNA localization to preparing full-length cDNA libraries free of contaminating nuclear intronic sequences. 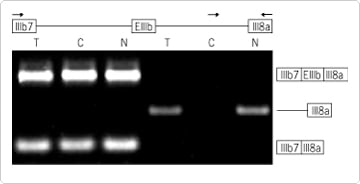 Figure 2. Analysis of Fibronectin pre-mRNA Splicing. The mutually exclusive alternative splicing of fibronectin exon EIIIb was analyzed by RT-PCR (35 cycles) using total (T), cytoplasmic (C), and nuclear (N) RNA isolated from 293 cells with the PARIS Kit. Using an intron-specific primer, the unspliced form was detected only in the total and nuclear fractions. No PCR products were detected in the minus RT and minus RNA controls (data not shown).

Unlike other RNA and protein isolation reagents, the PARIS procedure does not require a phenol/chloroform extraction followed by tedious precipitation and re-suspension steps. Furthermore, native proteins are recovered in buffers that are compatible with various downstream analysis. This means that protein fractions can be used not only for Western analysis, but also for functional or enzymatic assays. Thus, we were able to directly measure luciferase activity in total, nuclear, and cytoplasmic lysates prepared from HeLa cells transfected with firefly luciferase mRNA (Figure 3). As expected, no detectable luciferase activity was observed in the nuclear fraction, confirming the efficient cellular fractionation previously determined by Western blot analysis in Figure 1 and RT-PCR in Figure 2. 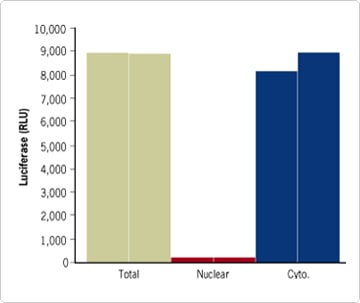 To further examine the distribution of a large number of endogenous proteins, we performed two-dimensional (2D) gel electrophoresis with total, nuclear, and cytoplasmic protein lysates from HeLa cells (Figure 4). To remove genomic DNA that can interfere with the 2D analysis, the protein lysates were first treated with TURBO DNase™ (patent pending), a hyperactive DNase I mutant compatible with the Cell Disruption and Cell Fractionation Buffers. A direct comparison between each gel showed that 1) only few proteins were present in both nuclear and cytoplasmic fractions and 2) all of the nuclear or cytoplasmic proteins were also present in the total protein sample (compare Total and Nuclear/Cytoplasmic overlay in Figure 4). Note, however, that the nuclear proteins represent only ~1/3 of the total cellular proteins. As the same amounts of protein (25 µg) were loaded on each gel, the nuclear proteins are overrepresented in the overlay when compared to the total protein sample. 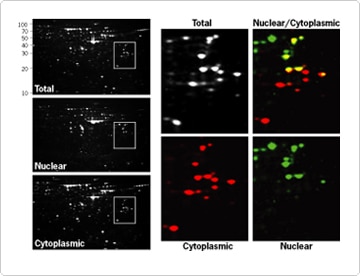 Figure 4. 2D Analysis of Proteins Isolated Using the PARIS Kit. Total, nuclear, and cytoplasmic proteins (~25 µg) from HeLa cells were resolved using a pH 4-7 IPG gel followed by 8-16% SDS-PAGE. Gels were stained with SYPRO® Ruby (Molecular Probes). Panels on the right show a magnification of a portion of each gel and an overlay of the nuclear and cytoplasmic gel pictures.

In summary, these results show that both nuclear and cytoplasmic RNA and protein are efficiently recovered with the PARIS procedure. RNA and native protein from total, nuclear and cytoplasmic fractions are compatible with various downstream applications, with virtually no cross contamination between the two cellular compartments. The PARIS Protein and RNA Isolation System includes sufficient reagent to perform 50 purifications. Each purification can accommodate 10 5 to 10 7 fresh cultured cells for cellular fractionation, and 1 to 75 mg of tissue or 100 to 10 7 cells for total protein and RNA isolation. The kit also comes with a comprehensive Instruction Manual and RNase-free microfuge tubes, glass fiber filters, and reagents for RNA isolation.
AM1921