A Second Shot at Life

Going a step beyond means Gideon and his family found hope when they needed it most.

When Gideon was just five years old, his health took a turn for the worse. He began experiencing fevers, unexplained swelling in his chest, and sensitivity to the sun. After multiple, inconclusive tests and doctor visits, he was due to have an MRI at Rady Children Hospital when his mom, Sosy, got a call asking her to bring Gideon to the hospital immediately. It was there that they got the heartbreaking news: their little boy had leukemia.

Gideon, or ‘Iron Gideon’ as he was affectionately known due to the port in his heart that made him look like Iron Man, underwent aggressive treatment – including an experimental protocol that sent him into anaphylactic shock. But like his namesake, Iron Gideon was a fighter and made it through his treatment with flying colors. The little boy who had stolen so many hearts during his stay at the hospital was finally able to ring the bell and go home.

Having exhausted most of his options during his first fight with cancer, Gideon had a limited roadmap for treatment. In Sosy’s words, “Things were looking really dark for us. We were told he had two chances to reach remission… and if he didn’t reach remission then there was nothing left.” After so many years of staying positive and putting up a fight, Gideon and his family were beginning to lose all hope. Then, they met Dr. Deborah Schiff.

Dr. Schiff, MD Pediatric Hematology & Oncology at Rady Children’s Hospital, had been working closely with Thermo Fisher Scientific to treat pediatric cancer patients with an experimental therapy called CAR T cell therapy. This innovative therapy uses small magnetic beads called Dynabeads™ to select T Cells from a patient’s blood and enable them to be replicated and programmed to be put back into the patient’s body, where they attack the cancer cells. Due to his history and the type of cancer he had, Gideon was a perfect candidate.

“The day she (Dr. Schiff) came in and offered us the CAR T cell therapy, it was literally the day of hope.” - Sosy

The therapy was a resounding success.

Today, Gideon is 11 years old and in full remission. He is able to go to school, play basketball, swim, and make memories with his family – things they thought they would never get a chance to do again. From a five-year-old who, in his own words, “only had one path” to a healthy, happy young boy with his whole life ahead of him, Gideon has another shot at life thanks to incredible doctors like Dr. Schiff who go a step beyond every single day to make a difference in the world. 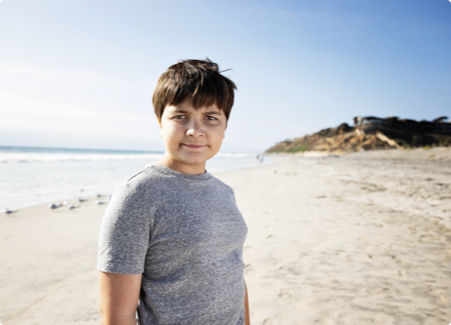 Removing the word ‘serial’ from crime

A sheriff on a mission gives his community a new sense of safety thanks to rapid DNA testing.

Turning the taps on without fear

A community comes together to revive their water, and inspire a new generation of STEM students along the way.

Connect to innovations in cell therapy