NovaFluor dyes are designed for more resolution with narrow emission spectra and minimal cross-laser excitation. Lower spectral spillover or overlap lessens the need for compensation, decreases spreading error, and increases opportunities to add new markers. This aids in construction of flow cytometry panels with increased resolution while expanding the overall size of panels.

Benefits to adding NovaFluor dyes include:

Flow cytometry is used in a broad range of applications including immunophenotyping, fluorescent protein detection, rare event analysis, cell health characterization, and more. In this presentation we will review the basics of fluorescence and how to use a fluorescence excitation/emission spectrum, compare conventional vs. full spectrum flow cytometry, and review numerous types of fluorophores listing advantages and challenges of each.

NovaFluor dyes are built using Phiton technology. This is a macrostructure labeled with small-molecule fluorophores. Unique fluorescent signatures are created to avoid cross-excitation between laser lines, a common problem with conventional labels, while the emission profiles are designed to avoid spectral spill over into other channels. These unique properties simplify high-dimensional panel design by unlocking previously unusable channels in current instrumentation and delivering higher resolution data for cleaner single-cell analysis and separation.

Choosing the optimal combination of fluorochromes can be simplified with a guided method. The Invitrogen Flow Panel Builder offers a customizable panel building process to fit your flow cytometry experimental needs, whatever your experience level.

NovaFluor dyes can be used in flow cytometry by themselves or with other dyes. NovaFluor dyes offer great utility in the replacement of dyes that are excited by multiple lasers and that also spillover to multiple detectors. For example, PE-eFluor 610 dye is excited by both the blue and yellow laser and therefore, when emitting signal, will be collected in associated detectors. Replacing PE-eFluor 610 dye with NovaFluor Blue 610 and NovaFluor Yellow 610 minimizes spillover into associated detectors. This allows for one additional marker. Detectors that may previously have gone unused can detect NovaFluor dyes because of the narrow excitation and tighter emission spectra.

Brightness is helpful when looking for dimly expressed antigens. Employing fluorophores that exhibit varying levels of brightness is advantageous for experiments involving multiple markers, as this allows for better signal resolution. Below is an example of swapping a bright, cross-excited dye for two spectrally cleaner dyes to allow accommodation of one more marker.

Typical channel distribution of an 11-color panel involving traditional dyes compared to a 13-color panel achieved by incorporating NovaFluor dyes. Dyes were replaced or added based on Figure 3 and examining excitation/emission spectra.

Figure 3. Two multicolor flow cytometry panels designed for the Attune NxT Flow Cytometer. By including NovaFluor dyes in the panel (lower section of the table above), researchers are able to collect data on an additional 2 markers. By replacing PE and its tandems with the specific NovaFluor dyes, cross-laser excitation is removed, allowing for full use for blue and yellow lasers.

Why are researchers excited about spectral flow cytometry?

"Going away from the tandem paradigm cleans up the annoyances with designing panels in terms of better resolution and brighter markers. This is a steppingstone in the progress of cytometry. Now that we have tools like NovaFluor dyes, we might be able to get away with not getting a UV line that’s super expensive and still get the same number of really good markers.”

“The NovaFluor dyes all show more restricted excitation/emission profiles than traditional fluorophores in the same range and make for good replacements in our panels. The NovaFluor Blue 610, NovaFluor Blue 660, and NovaFluor Yellow 570 are also much “cleaner” than the respective versions.”

Invitrogen CellBlox Blocking Buffer is formulated to block nonspecific binding of Invitrogen NovaFluor labels with cells. These nonspecific interactions can result in higher background labeling. CellBlox Blocking Buffer is a non-antibody, non-protein–based blocking solution, and should be used every time a NovaFluor dye is used for labeling any cell type to minimize background labeling (Figure 4).

CellBlox Blocking Buffer is also recommended for use with cyanine-based dyes or cyanine-based tandem dyes to block non-specific interactions with monocytes and macrophages to minimize background labeling (Figure 5).

See how to use CellBlox Blocking Buffer in the Cell Surface Staining Protocol.

Peripheral blood mononuclear cells (PBMCs) were either unlabeled (grey) or labeled with CD3 Monoclonal Antibody (clone UCHT1), NovaFluor Yellow 660 (Cat. No. H002T03Y04) with (red) and without (blue) the addition of CellBlox Blocking Buffer (Cat. No. B001T06F01). Forward Scatter vs. Side Scatter density plot shows lymphocyte and monocyte gating (A). Histogram overlay plots of CD3 expression are shown using a lymphocyte gate (B) and a monocyte gate (C). CD3 labeling combined with CellBlox Blocking Buffer is shown to reduce background in lymphocytes and reduce non-specific labeling of monocytes and macrophages, as compared with CD3 labeling without CellBlox Blocking Buffer, leading to an improvement in resolution. Data were acquired on a 4-laser Invitrogen Attune NxT Flow Cytometer using the 561 nm laser with a 695/40 nm bandpass filter.

Peripheral blood mononuclear cells (PBMCs) were labeled with a CD14 direct conjugate of APC and a CD3 direct conjugates of APC-Cyanine 7, PE-Cyanine 7, and PerCP-Cyanine 5.5, with and without the addition of CellBlox Blocking Buffer (Cat. No. B001T06F01). Forward Scatter vs. Side Scatter density plot shows a combined lymphocyte and monocyte gate (A). Dot plot overlay plots of CD3 and CD14 expression display cell labeling with (red) and without (blue) CellBlox Blocking Buffer. Use of CellBlox Blocking Buffer is shown to reduce nonspecific interactions with monocytes and minimize background labeling of cells with PE-Cyanine 7 (B), APC-Cyanine 7 (C), and PerCP-Cyanine 5.5 (D) tandem dyes. Data were acquired on a 4-laser Invitrogen Attune NxT Flow Cytometer using a 488 nm laser with a 695/40 nm bandpass for PerCP-Cyanine 5.5, a 561 nm laser with a 780/60 nm bandpass filter for PE-Cyanine 7, and a 638 nm laser with a 780/60 nm bandpass filter for APC-Cyanine 7.

* All measurements were taken on a 5-laser Cytek Aurora

We offer antibodies conjugated to many NovaFluor dyes to accommodate your flow cytometry needs.

NovaFluor CD4 Label Characterization Kits are formulated to enable the testing of all available NovaFluors as direct conjugates of CD4. These kits can be used to evaluate performance of NovaFluors on flow cytometers.

Learn about the history of spectral flow cytometry, the players in the marketplace, and the technological differences among spectral instrumentation. Whether you are a beginner or an advanced user, these fundamentals will help you conceptualize advances in spectral flow cytometry and how to think about designing experiments for a spectral cytometer. 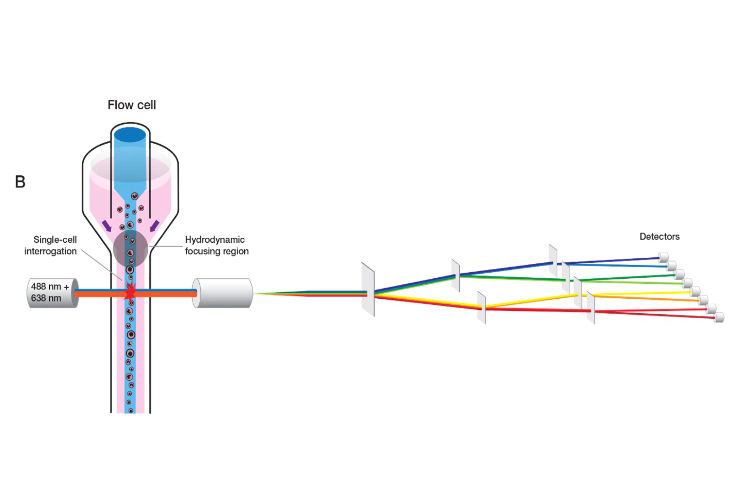