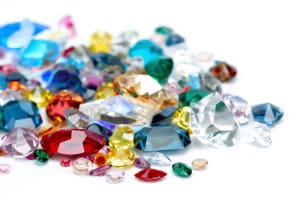 Determining the Origin and Authenticity of Gemstones using EDXRF

Precious gemstones include diamonds and colored stones such as rubies, emeralds, and sapphires. While diamonds remain the most expensive gemstone, the colored gems are rapidly gaining in popularity, as evidenced by their increasing use in engagement rings. As the value of colored gemstones increases, so does the need to verify their authenticity and source.

How Do Gemstones Form?

Most gemstones form in the Earth’s crust, approximately 3 to 25 miles beneath the Earth’s surface. Two gemstones, diamonds and peridot, are found much deeper in the Earth. Diamond forms in “kimberlite pipes” that originate in the Earth’s mantle (>125 miles) and end at the surface. Molten magma running through these pipes usually reaches the surface as lava and cools off, but if it doesn’t reach the surface, it cools more slowly, crystallizes, and forms coarse-grained minerals.

The first type of rock, igneous rock, is also formed by the cooling and crystallization of magma beneath the earth’s surface (intrusive or plutonic), or it can be formed when lava flows at the earth surface (extrusive or volcanic). Interlocking crystals grow within intrusive igneous rock and may form gemstones depending on the elements present, the cooling time, and the environment. The slower cooling (in the deep environment), the larger gemstones.

Gemstones found in igneous rock include the quartzes (including amethyst, citrine and ametrine), the garnets, moonstone, apatite, diamond, spinel, tanzanite, tourmaline, topaz and zircon. Some of these gemstones form in pegmatites and hydrothermal veins that are genetically related to igneous rocks.

Sedimentary rock is the second type and gives rise to the transported minerals such as jasper, malachite, opal and zircon. Sedimentary rocks are formed when rock is worn down and the fragments are carried by water or the wind, and they are finally compressed together over time.

How Are Gemstones Found?

Diamond mining is an industrialized process. Diamonds are typically recovered through pit mining, which involves the use of heavy machinery, hydraulic shovels, and trucks to mine diamonds from kimberlite pipes. Colored gemstone (other than diamond) mining, however, is a very different process. Mining for precious colored gemstones is rigorous and time-consuming because the deposits are few and when found, tend to be characterized by small quantities of gems scattered throughout a large amount of rock. Modern mining techniques are of little value in these circumstances, and the deposits are often too small to be profitable for major mine outfits, who leave them to small, independent miners who rely on the same manual techniques they have been using for decades. Nevertheless, in recent years, several major mining companies have entered the gemstone market with new strategies for employing modern mining practice.

How Can You Be Sure a Colored Gemstone Is Real?

As with gold, gemstone counterfeits, or synthetic gemstones, can be mistaken for the real thing. Another important factor in establishing the value of a gemstone is to know where it came from, both geologically and geographically, which can’t be determined visually.

Energy Dispersive X-Ray Fluorescence (EDXRF) is an important tool for the determination of the authenticity of colored gemstones and their geographical origin. Depending on the geological setting, precious gemstones like rubies, emeralds or sapphires from different origins often exhibit a characteristic combination of trace elements at different concentrations. As an example, identification and quantification of such elements may allow tracking an emerald down to its location of origin such as Colombia, Brazil, Afghanistan, Zambia or Zimbabwe. Similarly, the presence of certain trace elements also helps to distinguish between a valuable naturally formed gemstone (e.g. ruby) and a quasi-worthless synthetic crystal (e.g. synthetic ruby.)

Bauxite: The Difficult Source of Aluminum Ore
Chemostratigraphy and XRF – Buzzwords at NAPE and AAPG