Transfection of RNA is an offshoot of classic transfection technologies for introducing RNA into cells. The purpose of RNA transfection is similar to that of plasmid transfection. mRNA is introduced into cells to express the encoded protein, and study gene function and regulation. siRNA is used for RNAi studies that examine the effects of gene knockdown. One major difference between the two methods is that RNA can only be transiently transfected. 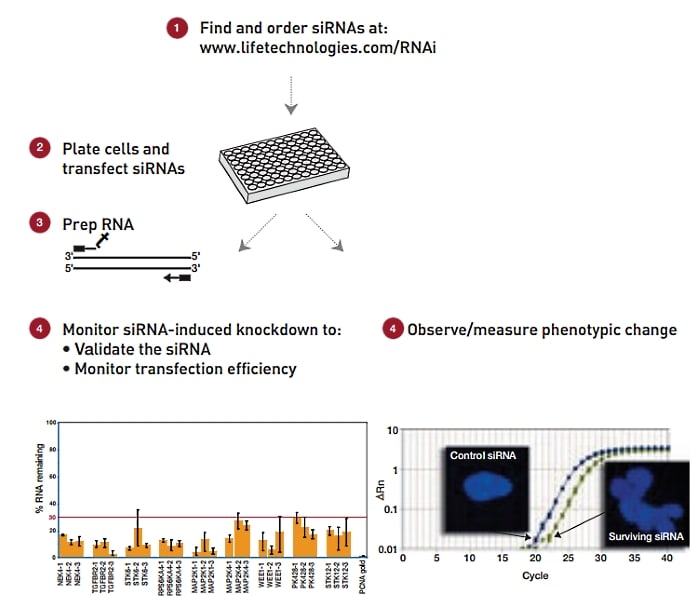 RNA oligonucleotides are susceptible to degradation by exogenous ribonucleases introduced during handling.

The efficiency with which mammalian cells are transfected with siRNA will vary according to cell type and the transfection agent used. This means that the optimal concentration used for transfections should be determined empirically. The major variables that impact siRNA transfection efficiency are the following:

It is important to include a positive control in each experiment. The positive control should elicit a reproducible, easily measured response in the cells and assay used in your study. If you see maximal effect above/below a pre-determined threshold level with this control, you know that measurements from other experiments tested on the same day are reliable. Note that it is important to empirically determine the thresholds for each assay and control pair.

Negative controls are just as important as positive controls for obtaining meaningful data. Always include a set of transfections with an equimolar amount of at least one negative control to compare the effects of the target RNA or siRNA-treated and control treated cells. Data from these crucial controls serve as a baseline for evaluation of experimental target knockdown.

Co-transfection is performed when the user wants to introduce both siRNA and a plasmid for expressing a protein into a cell. This protein can be part of the test system, or in most cases, it can be a reporter gene (luciferase, GFP, β-lactamase). In some cases, users may want to express a mutant protein along with the siRNA to block one pathway with the siRNA, and overexpress a mutant protein.

The presence of the plasmid may decrease transfection efficiency of all cargo (plasmid and siRNA) when a lipid transfection reagent is used, making transfection optimizations very important. Undesired and non-specific cell death can result with too much lipid, or too little knock-down or protein expression from the plasmid can occur if transfection conditions are not optimal.

The quality of siRNA can significantly influence RNAi experiments. siRNAs must be free of reagents carried over from synthesis, such as ethanol, salts, and proteins. Also, dsRNA contaminants longer than 30 bp are known to alter gene expression by activating the nonspecific interferon response and causing cytotoxicity (Stark et al., 1998). Therefore, we recommend using standard purity siRNAs that are greater than 80% full length.

Store siRNAs at –20°C or –80°C, but do not use a frost-free freezer. Our data indicate that up to 50 freeze/thaw cycles are not detrimental to siRNAs in solution at 100 μM (as assessed by mass spectrometry and analytical HPLC). However, we recommend that siRNAs that have been resuspended in RNase-free water or buffer be stored in small aliquots to avoid potential contamination.

Annealed, double-stranded siRNAs are much more nuclease resistant than single-stranded RNA. However, stringent RNase-free techniques should be used during all RNAi experiments.

If you suspect that a preparation of siRNA may be degraded, check the integrity of the siRNA by running ~2.5 μg on a non-denaturing 15–20% acrylamide gel. Visualize the RNA by staining with ethidium bromide, and verify that it is the expected size and intensity. The siRNA should migrate as a tight band; smearing indicates degradation.

The optimal amount of siRNA and its capacity for gene silencing are influenced in part by properties of the target gene products, including the following: mRNA localization, stability, abundance, as well as target protein stability and abundance.

Keep in mind that while too much siRNA may lead to off-target or cytotoxic effects, too little siRNA may not reduce target gene expression effectively. Because there are so many variables involved, it is important to optimize the siRNA amount for every cell line used. In addition, the amount of non-targeting negative control siRNA should be the same as the experimental siRNAs.

While cell density is important for traditional, pre-plated transfection experiments, cell density is less critical and requires little to no optimization, when siRNAs are delivered by reverse transfection. However, if too many cells are used, and the amount of siRNA is not increased proportionally, the concentration of siRNA in the sample may be too low to effectively elicit gene silencing. When cell density is too low, cultures can become unstable. Instability can vary from well to well because culture conditions (e.g., pH, temperature) may not be uniform across a multiwell plate and can differentially influence unstable cultures.

Presence of serum during transfection

Shop for everyday lab essentials to power your transfection steps

We've made it easier for you to quickly find and buy products for every step in your transfection workflow.

Back to the Transfection Basics Homepage