Analyzing the Expression of Small RNAs

Currently, the analysis of miRNA and siRNA expression suffers from two technological drawbacks. Firstly, most standard RNA isolation protocols were not designed to efficiently recover small RNAs species. For example, glass fiber filters, which are widely used to prepare total RNAs, do not quantitatively recover various RNAs that are smaller than 200 nt (such as 5S rRNA, snRNAs, snoRNAs, tRNAs, miRNAs, and siRNAs). Commercially available total RNA preparations do not always contain representative amounts of small RNA species because the RNA isolation protocols have not been optimized to recover small RNAs. A second technological challenge is that sensitive methods for the detection of small RNAs have not been previously available. RT-PCR, while being very sensitive, cannot be used to amplify small RNAs since in standard RT-PCR, the primers are about the same size as the small RNAs. As a result, siRNAs and miRNAs have been primarily detected by Northern analysis, a technique that is time-consuming and relatively insensitive.

To facilitate the analysis of small RNA expression, Ambion has developed the mirVana system, a complete solution for the isolation and detection of small RNAs (Figure 1). The mirVana products include:

"miRNA certified" FirstChoice® RNAs--human, mouse, and rat total RNAs that have been verified to contain miRNAs and other small RNA molecules

The mirVana™ miRNA Probe & Marker Kit--for the 5' end-labeling and purification of RNA or DNA probes, and preparation of small RNA markers

There are two widely used methods for isolating total RNAs: 1) phenol/chaotropic reagent extraction, and 2) binding to and elution from glass fiber filters (GFF). Ambion has determined that many small RNAs are not retained when total RNA is extracted by traditional GFF methods which are commonly used in most laboratories. We have, however, developed a modified GFF-based procedure--through the use of optimized binding and wash solutions--that provides quantitative yield of miRNAs and other small RNAs from virtually any tissue or cell line. A modification of this procedure can also be used to enrich small RNAs from a total RNA population. This technology is now available as the mirVana miRNA Isolation Kit (patent pending).

When purchasing commercially available purified RNAs, it is also important to consider the RNA isolation method used to isolate the RNA. Most of Ambion's FirstChoice Total RNAs have been validated for the presence of small RNA molecules--and we are constantly working on optimized isolation procedures for these and other tissue and cell line samples.

Although Northern analysis can be used to detect and quantitate small RNA, the technique is labor-intensive and, more importantly, not very sensitive. Ambion scientists have developed a sensitive assay that has been optimized for small RNA quantitation--the patented mirVana miRNA Detection Kit--which is based on solution hybridization and subsequent RNase protection. Short radiolabeled RNA probe is simply mixed with total RNA in an optimized hybridization buffer and all single-stranded RNAs (e.g. unhybridized probe, mRNAs, rRNA) are then digested by a mixture of RNase A and T1. Probe:target RNA hybrids are quickly recovered using a patented single-step RNase inactivation/precipitation procedure, run on a denaturing polyacrylamide gel, and visualized by autoradiography. In this assay, full-length and protected probes are easily distinguished by the presence of a short sequence at the 5' or 3' end of probes that is not complementary to the RNA target (Figure 2).

The mirVana miRNA Detection Kit has been used to detect miRNAs and siRNAs in a variety of tissues and cells. The sensitivity and specificity of the assay is illustrated in Figure 3 where miR-124 miRNA was detected only in human brain total RNA. This experiment confirms the tissue-specific expression of miR-124, previously determined by Northern blot analysis using 30 µg of total RNA (3). In contrast, only 1 µg of total RNA was used in the solution hybridization assay. Moreover, miR-124 expression could be detected in as little as 10 ng of total brain RNA after overnight exposure of the gel (data not shown). Another application of the mirVana miRNA Detection Kit, is the detection of two or more RNAs in the same sample. For instance, an expressed siRNA and its target mRNA can be monitored simultaneously

Small RNA probes for the solution hybridization assay can be readily prepared using one of two different methods: in vitro transcription (IVT) or 5' end labeling of an existing RNA oligonucleotide. Depending on the probe sequence and the radiolabeled nucleotide used, IVT probes typically result in ~2-fold greater sensitivity than 5' end labeled probes due to their higher specific activity (Figure 4). In contrast, 5' labeled RNA probes are more easily generated as they do not require gel purification. Ambion has developed and optimized kits for both probe-labeling methods -- the mirVana miRNA Probe Construction Kit for IVT and the mirVana Probe & Marker Kit for 5' end labeling. The mirVana miRNA Probe Construction Kit includes reagents for preparation of IVT templates as well as reagents for the IVT reaction. All you need to provide is an inexpensive, desalted, target-specific DNA oligonucleotide. A short sequence cleavable by RNase A and T1 is added to the 5' end of probe during the procedure. Probes prepared with the kit are therefore suitable not only for solution hybridization assays, but also for Northern blot or in situ hybridization analysis (using nonisotopically labeled probes).

The new mirVana Probe & Marker Kit provides reagents for the rapid preparation and purification of short, high specific activity 5' end-labeled RNA probes. Such probes are widely used in a variety of assays, including RNA structure/function studies, Northern blot and primer extension analysis. For solution hybridization assays, the antisense probe should carry only a few nontarget-specific nucleotides at its 3' end. The kit can also be used to label and purify DNA probes (see Northern Blot in Figure 4) and to prepare small Decade™ RNA markers (150, 100, 90, 80, 70, 60, 50, 40, 30, 20, and 10 nt; see Figure 5), which are included in the kit. 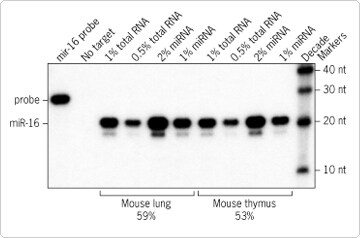 Figure 5. miRNA Detection after Gel Purification. miRNAs were gel purified on a 15% denaturing polyacrylamide gel from 150 µg of mouse lung or thymus total RNA using standard procedures. Recovery was analyzed with the mirVana™ miRNA Detection Kit and autoradiography (2 hours exposure) by comparing the amount of miR-16 miRNA in the sample before (1% or 0.5% of the starting total RNA) and after purification (2% or 1% of the miRNA fraction). Percentage of recovery (59 and 53% respectively) was then determined by quantification with a phosphorimager. mir-16 probe and Decade Markers were prepared with the reagents included in the mirVana™ Probe & Marker Kit.
AM1550,AM1552,AM1554,AM1560
References1. Ambros V (2003) MicroRNA pathways in flies and worms: growth, death, fat, stress, and timing. Cell 113 (6): 673-6.

3. Lagos-Quintana M, Rauhut R, Yalcin A, Meyer J, Lendeckel W, Tuschl T (2002) Identification of tissue-specific microRNAs from mouse. Curr Biol. 12 (9): 735-9.
Application: Analysis of miRNA Recovery After Gel Purification Because of its extreme sensitivity, the solution hybridization assay is ideal for the detection of small RNA molecules in rare RNA samples. The mirVana miRNA Detection Kit is useful for analysis of miRNA expression, while conserving most of the RNA sample for subsequent critical experiments. Prior to cloning and array analysis miRNAs have to be gel purified (1, 2). However, analyzing the integrity and quantity of the recovered miRNAs by Northern blot requires a large proportion of the sample. In contrast, only 1-2% of a miRNA sample or less is required for solution hybridization analysis (Figure 5).