The thiol-reactive dyes described in this section have their longest-wavelength absorption peaks at less than 410 nm (Thiol-reactive dyes excited with ultraviolet light—Table 2.2). Typically, these dyes exhibit blue fluorescence and have much weaker absorption than the dyes described in Thiol-Reactive Probes Excited with Visible Light—Section 2.2, with extinction coefficients often below 20,000 cm-1M-1.

The strong environmental dependence of the emission spectra and quantum yields of several of the dyes—especially the coumarin, benzoxadiazole (NBD probes and ABD-F, Thiol-Reactive Probes Excited with Visible Light—Section 2.2), aminonaphthalene (e.g., dansyl) and Dapoxyl fluorophores—makes some of these thiol-reactive probes useful for investigating protein structure and assembly, following protein transport through membranes and studying ligand binding to receptors.

Alexa Fluor 350 C5-maleimide (A30505), a thiol-reactive, sulfonated coumarin derivative, produces protein conjugates that are optimally excited at 346 nm and have bright blue fluorescence emission at wavelengths slightly shorter than AMCA or AMCA-X conjugates (emission maximum ~442 nm versus 448 nm). The shorter emission maximum of Alexa Fluor 350 conjugates reduces their spectral overlap with the emission of fluorescein and Oregon Green 488 dyes.

Like our other Alexa Fluor dyes, Alexa Fluor 350 C5-maleimide offers unrivaled brightness and pH-independent fluorescence, as well as water solubility and a low degree of quenching upon conjugation (The Alexa Fluor Dye Series—Note 1.1).

The Pacific Blue dye, which is based on the 6,8-difluoro-7-hydroxycoumarin fluorophore, exhibits bright blue fluorescence, with excitation/emission maxima of ~410/455 nm. Significantly, the pKa value of this 6,8-difluoro-7-hydroxycoumarin derivative is 2–3 log units lower than that of the corresponding 7-hydroxycoumarin. Thus, the thiol-reactive Pacific Blue C5-maleimide (P30506) yields conjugates that are strongly fluorescent, even at neutral pH. In addition, Pacific Blue conjugates are efficiently excited by the 405 nm spectral line of the violet diode laser developed for fluorescence microscopy and flow cytometry.

Fluorescence emission of the dialkylcoumarin conjugates is moderately sensitive to environment.

Unlike MDCC (described below), which is intrinsically fluorescent, the maleimides CPM and DACM are essentially nonfluorescent until they react with thiols, permitting thiol quantitation without a separation step.

The thiol-reactive Pacific Orange C5-maleimide yields conjugates with excitation/emission maxima of ~400/551 nm, making it ideal for use with violet diode laser–equipped flow cytometers and fluorescence microscopes. Moreover, Pacific Blue conjugates (described above with the other coumarins) and Pacific Orange conjugates can be simultaneously excited at 405 nm and emit at 455 and 551 nm, respectively, facilitating two-color analysis.

Not only is N-(1-pyrene)maleimide (pyrene maleimide, P28) essentially nonfluorescent until it has reacted with thiols, but once excited, pyrene–thiol conjugates can interact to form excited-state dimers (excimers) that emit at longer wavelengths than the excited monomeric fluorophore. Pyrene maleimide conjugates often have very long fluorescence lifetimes (>100 nanoseconds), giving proximal pyrene rings within 6–10 Å of each other ample time to form the spectrally altered excimer (Figure 2.3.1). The excimer-forming capacity of pyrene maleimide can be exploited for detection of conformational changes

of proteins and for analysis of protease activity.

Fluorescence of the actin monomer labeled with pyrene iodoacetamide (P29) has been demonstrated to change upon polymerization, making this probe a widely utilized tool for following the kinetics of actin polymerization.

Conjugates of N-(1-pyrenemethyl)iodoacetamide have the longest excited-state fluorescence lifetimes (>100 nanoseconds) of all reported thiol-reactive probes. Excimer formation can also be a useful indicator of protein folding.

As compared with iodoacetamides or maleimides, acrylodan (A433) and 6-bromoacetyl-2-dimethylaminonaphthalene (badan, B6057) generally react with thiols more slowly but they form very strong thioether bonds that are expected to remain stable under conditions required for complete amino acid analysis. The fluorescence emission peak and intensity of these adducts (Figure 2.3.2) are particularly sensitive to conformational changes or ligand binding, making these dyes some of the most useful thiol-reactive probes for protein structure studies.

For example, the acrylodan conjugate of an intestinal fatty acid–binding protein, ADIFAB (Probes for Lipid Metabolism and Signaling—Section 17.4), is a sensor for free fatty acids 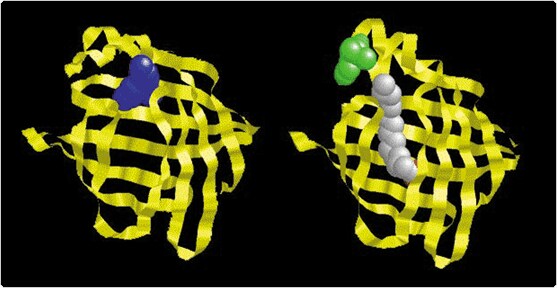 To develop appreciable fluorescence, both the reactive anilinonaphthalenesulfonate iodoacetamide (IAANS) and maleimide (MIANS, also called Mal-ANS) must be reacted with thiols that are located in hydrophobic sites. Often, however, buried unsolvated thiol residues are exceptionally reactive, allowing these sites to be selectively modified by these reagents. The environment-sensitive fluorescence properties of the protein conjugates of MIANS and IAANS are similar to those of the structurally related probes 1,8-ANS and 2,6-TNS (A47, Other Nonpolar and Amphiphilic Probes—Section 13.5). The fluorescence intensity, and to a lesser extent, the emission wavelengths of the conjugates, tend to be very sensitive to substrate binding and folding and unfolding of the protein, as well as the association of the labeled protein with other proteins, membranes or nucleic acids.

The fluorescence of IAEDANS (I14) is quite dependent upon environment,

although less so than that of IAANS and MIANS conjugates. Its conjugates frequently respond to ligand binding by undergoing spectral shifts and changes in fluorescence intensity that are determined by the degree of aqueous solvation. Advantages of this reagent include high water solubility above pH 4 and a relatively long fluorescence lifetime (sometimes >20 nanoseconds, although commonly 10–15 nanoseconds), making the conjugates useful for fluorescence polarization assays

(Fluorescence Polarization (FP)—Note 1.4). The emission spectrum of IAEDANS overlaps well with the absorption of fluorescein, Alexa Fluor 488 and Oregon Green 488 dyes, as well as that of Green Fluorescent Protein (GFP). IAEDANS is an excellent reagent for fluorescence resonance energy transfer (FRET) measurements

(Fluorescence Resonance Energy Transfer (FRET)—Note 1.2). IAEDANS usually reacts with thiols; however, it has been reported to react with a lysine residue in tropomyosin.

This reagent, originally described by Kosower and colleagues,

is also useful for detecting the distribution of protein thiols in cells before and after chemical reduction of disulfides.

(T2556, Introduction to Thiol Modification and Detection—Section 2.1). Both monobromobimane and the more thiol-selective monochlorobimane (M1381MP) have been extensively used for detecting glutathione in live cells

because it is unlikely to fluoresce until both of its alkylating groups have reacted. It has been used to crosslink thiols in myosin,

Despite its short length, dibromobimane is also an effective intermolecular crosslinker in some cases.

Bimane iodoacetamide and bimane C3-maleimide are blue-fluorescent thiol-reactive fluorophores with excitation/emission maxima of ~375/456 nm. The small size of the bimane fluorophore reduces the likelihood that the label will interfere with the function of the biomolecule, an important advantage for site-selective probes.

Like IAEDANS (I14), the iodoacetamide and maleimide derivatives of stilbene (A484, A485) have high water solubility and are readily conjugated to thiols. Their combination of high polarity and membrane impermeability makes these polysulfonated dyes useful for determining whether thiol-containing proteins and polypeptide chains are exposed at the extracellular or cytoplasmic membrane surface.

and of the lipid-binding region of E. coli pyruvate oxidase in order to detect conformational changes upon substrate binding.

Similarly, single-cysteine mutants of Escherichia coli Na+-glutamate transporter GHS have been probed with the sulfonated stilbene maleimide (A485) to systematically study the topology of this membrane protein.

Conjugation of N-(1,10-phenanthrolin-5-yl)iodoacetamide to thiol-containing ligands confers the metal-binding properties of this important complexing agent on the ligand. For example, the covalent copper–phenanthroline complex of oligonucleotides or nucleic acid–binding molecules in combination with hydrogen peroxide acts as a chemical nuclease to selectively cleave DNA or RNA.

For a detailed explanation of column headings, see Definitions of Data Table Contents